It was one surreal day, around 4pm or so, and I was out on our street for a reason I can’t really remember now, I was pretty young then. Then as I got to the Mai-suya end of our busy street, I noticed this huge and electrified crowd thronging after a slowly-moving convoy. At the center was a white limousine and from the sun roof, was a man full of charming smiles, waving to the frenzied crowd, he looked very smart, handsome and he was also wearing white, all white, the hat too was white. It was quite a dazzling spectacle. The limo was headed towards the city stadium where he had a show. I had just set my eyes on Africa’s greatest magician, ‘Professor Peller’. And Abiyamo would never see him again. But for a young African child who was also seeing a limousine for the very first time or so, it was truly a magical moment for me. He performed and left my state leaving incredible tales of outstanding feats. Ladies and gentlemen, this is a piece on Nigeria’s most famous magician, Professor Peller. For about thirty years, Peller held the world’s most populous black nation spellbound with millions gasping at the whisk of his wand. I hope you find this magical.

Here, Peller is shown with the love of his life and assistant magician, Alhaja Silifat.

He was born in 1941 at Iseyin and he was named Moshood Folorunsho Abiola. He would later pick on the stage name of ‘Professor Peller’, an appellation that has stuck to him like a second skin.

HIS MAGICAL PERFORMANCES AND EXPLOITS

When Professor Peller was alive, he was the most brilliant magician in all of Africa. I am not too sure if the record has been broken. Even in death, Peller remains the greatest of all. He performed not only before princes but also held kings spellbound with his magic. Here is how Femi Oyebode, a Professor of Psychiatry at the University of Birmingham described Peller and one of his shows in 1972 at the George V Stadium in Lagos (that is the old name of the Onikan Stadium):

My last ever visit to the stadium was to see Professor Peller, a magician, and said to be a member of the Magic Circle take on the last of our traditional magicians whose name now escapes me (itself a significant fact). Professor Peller was dressed in black tails, a top hat, a wand in one hand, black shoes and well-cut hair. He was a perfect picture of debonair gentleman and was assisted by an attractive young woman. He flicked his white handkerchief and a white dove flew out. He pulled at his cuff links and flowers bloomed under his command. He was confident, majestic. He was suave and graceful. He levitated his assistant. He cut her in two without drawing blood. He locked her in a cupboard, chained up several times over yet she disappeared! It was a masterly performance. The crowd clapped, hooped. We were seduced against our better judgment. We wished desperately that the traditional magician would enthrall and endear us to his magic, the mysteries of African magic. We were disappointed or shall I say that I was disappointed. When he came on stage dressed only in a loincloth of indeterminate color, you could hear the audience gasp aloud. Was this African magic? This crude, little thin man who seemed recently woken from the dead? He swallowed a stone and turned his backside to us, slipping his loincloth to one side and excreted the stone. Awfulness and shame. He submitted his abdomen to a sharp sword to be sliced open. But by now, the absence of razzmatazz and of finesse had turned us against him. The crowd poured through the gates. That was how disgusted we were. You can say that at George V stadium, in early adulthood I lost two of my childhood dreams.

A master at his craft and a consummate entertainer, he cast a most powerful spell on the following African leaders, right in their presidential palaces:

-The late President Gnassingbe Eyadema of Togo (Eyadema later died after spending 38 years in power, he was the longest-serving ruler in Africa when he died in 2005 . His son, Faure, is currently the President of Togo).

-The late President Samuel Kanyon Doe of Liberia . There is an interesting story behind his performance for the late strongman of Monrovia. There was a time Peller had a performance in Liberia in the 1970s and the crowd was just too massive. The Liberian government drafted security forces to the venue of the act to control the surging crowd. One of those responsible for maintaining security that day at Peller’s performance was a young man called Samuel Doe. So when Doe became President, he summoned Peller, Nigeria’s finest magician to come perform for him. Such was the stellar performance of Peller. Doe said he was busy controlling the surging crowd and he could not witness the even properly as at that time when he was a junior soldier.

Apart from the Presidents mentioned above, Peller also reigned supreme in Nigeria. It was like there was no other conjurer in the land. Chief Obafemi Awolowo, the late Premier of the Western Region was one of those he used to entertain regularly.

-Peller was a prolific magician with many shows, some of which were the Invisible General, the Escaping Box, Changing Dresses and the Zigzag. One thing with Peller’s performances is that they were executed with maximum finesse and excellence. He was thorough and professional. Perhaps, if not for death, he might have even eclipsed David Copperfield of the USA in fame.

-While growing up, he was nicknamed Moshood Olori Pupa (Moshood the Red-Headed Boy).

-One of his classical performances included putting his wife in a ‘magical coffin’ and severing the same coffin into two halves with a ‘magic coffin’. There is no spirit at work here, watch how the trick is done here:

When Peller was performing, there was really no Internet as we have it today, so it was quite easy to fool people in their millions. Now, YouTube is spoiling the show for many magicians except the most ingenious of them. 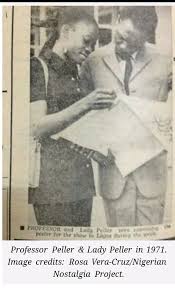 He was described as a very romantic man. His most prominent wife, Alhaja Silifat, fell in love with him while she was still in the secondary school. She confessed that she had always admired him and his performances even before then and each time she watched him perform, her heart fluttered with affection for the fine magician with tribal marks.

The late ‘professor’ of magic.

In 1967, Iseyin Grammar School in Oyo State became the place where Peller planted the seed of love even if he was there to perform but was carried away by the ravishing young beauty in the crowd called Silifat. Hear her: “I am sure he musthave been attracted to me because of my beauty. So, he just whispered to me: ‘Baby, you are beautiful.’ And I said, ‘Thank you.’ He didn’t ask me out that day. For quite a long time, we were friends.” For a couple of years more, they continued dating and Lady Peller said after two years, she said yes to his advances. They got married in 1971 and they already had a child by then.

For a man who was a showstopper at any events, it is no surprise that not a few women fell for the enchanting spell of Nigeria’s most famous magician. He was a man of many women and married many of them. However, the best known of these ladies, with whom he performed his magic tricks is Alhaja Silifat Adeboyin Peller (see picture). The whole of Nigeria knew her as Lady Peller and she is most famous for the act in which she was ‘sliced’ into pieces by Peller and had a hard time putting her back. Now 66 years of age with her husband gone and not remarrying, she is tending to her grandchildren while reminiscing over the glittering wonders of an empire of magic that once held sway. Lady Peller was born in Kishi, Oyo State where her father was the Chief Imam and had five children for him, while also raising many other step-children.

However, unknown to many, their rosy marriage later had a deep crack to the extent that they were not staying together anymore. When Peller was killed at his Onipanu residence, he was in Lagos State for a function while Lady Peller was living at the GRA, Ikeja. Although they were not officially separated as they still saw regularly, Peller checked on her in Ikeja but met her absence. As at that time, they had already reconciled and were even planning on coming back together before Peller was prematurely silenced by the assassin’s bullets.

Peller left a message for her to check on him as he was not feeling well and was rushed to Ibadan for treatment. Lady Peller was furious as to why he was taken to Ibadan since they had family doctors at the Ajayi Memorial Hospital and the EKO Hospital in Lagos but upon getting to Ibadan, she was simply told that Peller was dead. She fainted immediately only to wake up to a bucket of water and intense fanning by family members. She said: “It was a great shock and I had never seen that kind of things. I don’t ever wish to go through that land of thing again.” While he was alive, he also taught her some magic and ensured she got some training in Michigan, USA. Little wonder they always performed together and as far as she is concerned, her religion is not against the brand of magic she performed with her late husband because according to her, ‘it was not fetish’. She still remembers the very good old days and says she will not remarry and will still marry him over and over again, rounding off: They only want to enjoy what Professor Peller was enjoying for several years. But they can’t have it.”

DID HE ACTUALLY CUT HIS WIFE INTO TWO?

No. I will not call magic a lie but I will describe it as a well-oiled pack of grandiose dramatization, outright deception, fantastic misdirection and uncanny slyness. There is nothing spiritual about magic, it is nothing but an agglomeration of well-practised tricks. However, if done well, an excellent magician can actually ‘create something out of nothing’ or make the ‘possible from the impossible’ (even if that will look like he or she is going against the established laws of Newtonian physics, it is all an illusion) in a very fluid and convincing manner (in that case, I will call many Nigerian politicians magicians). So what happened that fateful day when Professor Peller allegedly ‘sliced’ his wife into two but could not put her back together and she almost ‘died’?

It was at the National Theatre in Iganmu, Lagos and the Lagos State Governor, Alhaji Lateef Jakande was present at the occasion to represent Chief Obafemi Awolowo. The event started as planned but then the Peller team decided to throw in a suspense-filled event, as their usual practice when they have events following one another every evening. The essence was to create so much suspense so that they will draw in even more crowd by the next day. So for day one, the idea was to create an illusion that he ran into trouble while sawing his wife in half. But then, the next step involved ‘reviving’ her. After the ‘cutting’, which was obviously done with a lot of dramatic effects, the crowd went into a frenzy and began to shout ‘We want Lady Peller!’, ‘Give us Lady Peller!’. Later in 2012, the 66-year-old Lady Peller was interviewed and asked about the incident and she insisted that Peller actually cut her into two and she even sustained some light injuries.